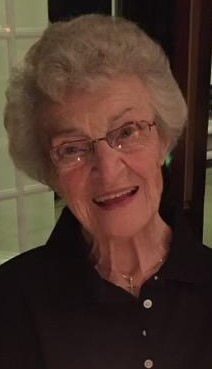 Please share a memory of Pearl to include in a keepsake book for family and friends.
View Tribute Book

Pearl Frances Pursley, of Manchester, NJ, passed away on November 2, 2022, at the age of 99. Pearl was born in Jersey City, the beloved sister of the late Andrew Rhode, Gladys Greenwald, Dorothy Giacco, Lawrence Connin, and Fran Wallace. She grew up attending St. Matthew's Lutheran Church. It was there she met her future husband, Richard Warren Pursley. He pulled her hair in Sunday school, and her heartstrings in high school. They were married 70 years and spent a lifetime together before his demise at the age of 95. Pearl and Warren were both employed by Colgate Palmolive Company but soon after her children grew she enrolled into the Wilfred Beauty Academy and became a licensed beautician.

Pearl loved to sing and was blessed with the voice of an angel. She won many voice competitions and once played at the Paramount Theatre in NYC. She sang in church, at wedding receptions and started her own band to perform for the USO during wartime. She was a self-taught pianist and organ player. She could do anything with her hands, knit, crochet, needlepoint, sew, and grow her own vegetables from farm to table. Her real passion was for cooking and baking. She was famous for her Norwegian Stollen and traditional fruit cake. Her favorite book of choice was any cookbook she could spend time with and of course her daily readings from her bible. Mom never sat idle. She enjoyed puzzles, Sudoko, and her iPad. At 99 she chose to remain at home taking care of herself. Her strong faith in God willed her the strength and endurance to live independently.

Daughter of the late Elizabeth Rhode and Walter Connin, she had the roots of fighting Irishmen and the fortitude of Norwegian Vikings. She was a devoted mother to her children Linda and Bob Corbo, Glenn and Denise Pursley, and Kenneth Pursley and Dominique Steffens, her six grandchildren Sean (Melissa) Pursley, Victoria Pursley, Lauren (Jeff) Jackson, Robert (Lauren) Corbo, Brian Pursley, and Christopher Pursley, her seven great-grandchildren Luke, Cole, Viviane, Zack, Hayley, Alessa, Sophia, and many nieces and nephews.

Calling hours will be held on Tuesday, November 8, 2022 from 2:00pm to 4:00pm at Knott's Colonial Funeral Home 2946 South Broad Street Hamilton, NJ 08610. Interment at the Brigadier General William C. Doyle Veterans Memorial Cemetery will be held privately for the family. In lieu of flowers memorial contributions can be made to St. Matthew's Lutheran Church 85 Wayne Street Jersey City, NJ 07302. Condolences for the family can be left at www.knottscolonialfuneralhome.com.

Share Your Memory of
Pearl
Upload Your Memory View All Memories
Be the first to upload a memory!
Share A Memory