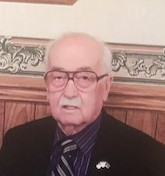 Please share a memory of Peter to include in a keepsake book for family and friends.
View Tribute Book
Peter Spildener: Hamilton Twp., NJ Peter Spildener age 90 passed away on March 20, 2021. Born in Palanka on August 9, 1930, he immigrated to the USA in 1949 from Germany. He served with the US Air force during the Korean War. Peter worked for the Curtiss-Wright Corporation for 5 years and retired from Federal Civil Service at McGuire Air Force Base in 1987. Peter was a member of St. Raphael's R.C. Church. He was an honorary member of the German American Society. He was also a member of the National Association of Retired Federal Employees (NARFE) and the Air Force Association (AFA). During his younger years he enjoyed the mountains and lived in the state of Washington for 5 years. Peter is survived by his wife of 64 years, Marian.. He is predeceased by a stepdaughter, Elfriede Chac of Philadelphia, PA. He is also survived by a daughter, Linda P. Spildener; a son and daughter in law, John and Stephanie Spildener of New Egypt, NJ; a granddaughter Victoria Spildener and fiancé Hal Boston of Jackson, NJ; granddaughter Jennifer Spildener and fiancé Trey Potter of Virginia Beach, VA; granddaughter Christina Chac and husband John Goodman of Philadelphia, PA. Mass of Christian Burial will be held at St. Raphael-Holy Angels Parish 3500 South Broad St. Hamilton on Friday March, 26th at 10am. Interment will immediately follow at Holy Sepulchre Cemetery. Calling hours will be from 8am – 10am on Friday March 26th, 2021 at Knott's Colonial Funeral Home, 2964 S. Broad St, Hamilton Twp, NJ. In lieu of flowers, donations can be made be made in Peter's memory to NFCR (National Foundation of Cancer Research).
To send flowers to the family or plant a tree in memory of Peter Spildener, please visit Tribute Store
Friday
26
March

Share Your Memory of
Peter
Upload Your Memory View All Memories
Be the first to upload a memory!
Share A Memory
Send Flowers
Plant a Tree