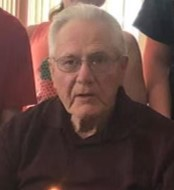 Please share a memory of Nicholas to include in a keepsake book for family and friends.
View Tribute Book
Nicholas J. Mayer, 80, of Hamilton, passed away on December 19, 2020. Born in Palanka, Yugoslavia, he came to the United States in 1950 when he was 10 years old. He graduated from Trenton Catholic High School in 1959 where he enjoyed playing and watching soccer. Nick's family owned and operated Mayer's Bakery on South Broad Street in Hamilton, which the family started in the late 50's. Nick also worked for the Hamilton Twp. Road Department. He was a member of the German American Club and he enjoyed soccer, trips to Atlantic City, and watching his grandchildren and following their many activities. Son of the late Nikolaus and Anna (Opperman) Mayer, brother-in-law of the late Tony Hahn, Joe Vas, Pete Kernast, and uncle of the late Victor Vas, he is survived by his loving wife of 52 years Sally (Adams) Mayer, of Hamilton, his children Dorothy and her husband Robert Scranton, of Bordentown, Nick Mayer, of Hamilton, and Sally and her husband Christopher Corbin, of Burlington Twp., grandchildren Nathan and Rachel Scranton, and Patrick, Katelyn, Connor, and Taylor Corbin, his sisters Anna Hahn, Mary Vas, and Rose Kernast, nephews Peter Kernast, Ron Kernast, and Joseph Vas, and many other family and friends. Calling hours will be held on Tuesday, December 22, 2020 from 5:00pm to 7:00pm at Knott's Colonial Funeral Home 2946 South Broad Street, Hamilton. Funeral Mass will be celebrated on Wednesday, December 23, 2020 at 10:00am at St. Anthony's Roman Catholic Church 626 S. Olden Avenue, Trenton. Interment will take place in Colonial Memorial Park Cemetery, South Broad Street, Hamilton. In lieu of flowers, memorial contributions can be made to the Holy Redeemer Hospice 2 South Gold Dr. Hamilton, NJ 08691. Condolences can be left at knottscolonialfuneralhome.com.
To send flowers to the family or plant a tree in memory of Nicholas Mayer, please visit Tribute Store
Tuesday
22
December

Share Your Memory of
Nicholas
Upload Your Memory View All Memories
Be the first to upload a memory!
Share A Memory
Send Flowers
Plant a Tree