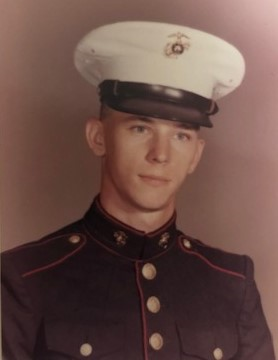 Please share a memory of George to include in a keepsake book for family and friends.
View Tribute Book
George Papp 76 of Hamilton passed away July 14, 2020 holding the hands of his daughter Jennifer and his wife Jackie. George was born in Trenton and he attended Trenton Schools and graduated from Trenton Central High School and was in the Red Team band where he played the saxophone. George joined the United States Marines in 1964 and proudly served in Vietnam. In 1980 he enlisted in the Marine reserves for 5 years and was a Sergeant. He was employed by ADT, 7-Up and is retired from the Trenton Times as a paper handler. He was an active member of Rusling Hose Company, A Fireman from 1967-1976, during this time he held an undefeated speed record for climbing (85 feet in 22 seconds) Son of the late George and Barbara Papp (Immigrants from Hungary). Surviving are his loving daughter and son in law Jennifer and Matthew Hewett of Hamilton. The lights of his life, his granddaughters, Sarah and Abigail. His wife Jacquelyn Papp. 2 sisters and a brother in law Barbara Thiele of Florida and Marion and George Evans of California. Several nieces and nephews. 2 Aunts Margaret Qualis of Yardley, PA and Betty Parker of Pennington as well as several cousins. His devoted caregiver Lisa and his cat Margie. Funeral services will be Tuesday 11:30am at the Brig. General William C. Doyle Veterans Cemetery. 350 Provinceline Road, Arneytown, NJ The funeral procession will leave Knott's Colonial Funeral Home, 2946 So Broad St. Hamilton at 10:45am Tuesday. Condolences may be left for the family at knottscolonialfuneralhome.com
To plant a beautiful memorial tree in memory of George Papp, please visit our Tree Store

Look inside to read what others have shared
Family and friends are coming together online to create a special keepsake. Every memory left on the online obituary will be automatically included in this book.
View Tribute Book
Services for George Papp
There are no events scheduled. You can still show your support by planting a tree in memory of George Papp.
Plant a tree in memory of George

Share Your Memory of
George
Upload Your Memory View All Memories
Be the first to upload a memory!
Share A Memory
Plant a Tree