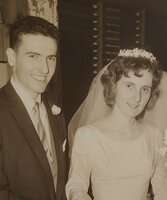 THEODORE "TED" EDWARD ELDRIDGE, 83, of Jane Lew, WV, passed away to the loving arms of our Lord Jesus on Friday, December 17, 2021 peacefully at home, surrounded by his loving and dedicated wife Mary and family. Ted was born a twin in Trenton, NJ to Trenton police officer Arthur W. Eldridge and registered nurse Lillian Pickett Eldridge on September 21, 1938. He went to Blessed Sacrament parochial school and Trenton Catholic high school where he was in the camera club and graduated in 1957. He and his twin brother Bill were camp counselors at the Knights of Columbus boys summer camp on Bamber Lake in Lacey Twp., NJ in 1955 and 1956. Ted worked as a store clerk, grocery manager and assistant manager for A&P / Super*Fresh grocery stores for 43 dedicated years. He was known in many of the stores he worked as "Mr. Fix-it", retiring in 1999. It was in 1957 in that A&P on the corner of Beatty and Adeline Streets in Trenton, NJ that he saw his beloved wife Mary cashiering and told his twin brother Bill, "See that girl? That's the girl I'm going to marry". Ted and Mary were married on October 14, 1961 at Blessed Sacrament church in Trenton, NJ. Upon return from their honeymoon, Ted received notice of his draft into the US Army and left his wife of 1 month on November 16, 1961, along with his twin brother Bill, to Ft. Gordon, GA, later to be stationed in Stuttgart, Germany, until his honorable discharge as a E4 SPEC 4 in 1963. While Ted served in Germany, he was in the Honor Guard and was a surveyor. He was proud of his service and told many good stories. He drank many a good pint of bier and always laughed to recall the large biceps and hairy legs of the women who served it in the gasthaus! Ted enjoyed reading, gardening and canning vegetables, playing Scrabble and card games with family and friends over the years and was rarely without a new joke to tell. He always wore a big, bright and contagious smile and was a very congenial and caring man. He was always willing to lend a helping hand or offer a kind word. He was not a man of many words but when he spoke it was either funny or wise. He was a humble man and knew his faults and was rarely a judgemental man. Ted was a devout and dedicated Catholic with a very deep faith. He prayed the Rosary several times daily for loved ones and for peace in the world. Ted was involved in church activities and was the dough kneader with his large, strong hands when the church ladies made their Easter pascha breads and was always helping wash the pots and pans in the church kitchen. Ted was a very dedicated and loving husband, father and friend/neighbor. Ted's biggest personal accomplishment, as seen through the eyes of his family, was his victory over alcoholism and 35 years of continual sobriety. This was the hardest challenge but through his love for his wife and children and faith in God, he overcame. For this his family is truly proud of Ted more than words can say. Ted is survived by his fraternal twin William "Bill" Eldridge, son Ted J. Eldridge, daughter Laura M. Arnao and grandsons Daniel and Joseph, son Paul E. Eldridge wife Amy Swan Eldridge and granddaughters Molly and Iris, 14 nieces and nephews, 23 great nieces and nephews, and three great, great nieces, and one great, great nephew. Ted is proceded 21 days in death by his loving wife Mary Carol Harhigh Eldridge; preceded in death by his parents Arthur W. Eldridge and Lillian Pickett Eldridge, brothers Arthur H. Eldridge, Sr. and Charles Eldridge. Visitation will be Thursday, January 13, 2022 from 4:30 to 7 p.m. with 5 p.m. Panachida, at Knott's colonial Funeral Home, 2946 South Broad Street, Hamilton, N.J. 08610. The Ceremony of Christian Burial and Liturgy will be held at 10 a.m. on Friday, January 14, 2022 at The Assumption of the Virgin Mary Byzantine Catholic Church, 202 Grand Street, Trenton, N.J. 08611, followed by burial at the St. Mary's Cemetery no. 3, Ridge Ave. Trenton, N.J. 08610. Memorial donations may be made in Mr. Eldridge's name to the St. Mary Holy Protection of the Mother of God church 2115 Listravia Ave, Morgantown, WV 26505 or to the Assumption of the Virgin Mary Byzantine Catholic Church in Trenton NJ.