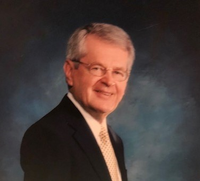 John Michael Lucash, 90 of Hamilton Square passed away Friday, March 27, 2020 with his close and loving family by his side. John was born in Sheppton, PA, and remained there until 1947 when he enlisted in the United States Air Force, going on to serve his Country in the Korean War. Shortly after his honorable discharge, John began his lifelong career with RCA /General Electric as an Electronics Technician and ultimately retiring in 1992 after rising to the ranks of Director and VP of Product Assurance. John was a graduate of Sheppton High School, played Semi-Professional Baseball for a short stint and went on to graduate from Rider College (University). John and Marge resided and raised their family in Robinnsville, NJ. After retirement, John and Marge moved to Hilton Head Island, SC. They eventually returned to the Northeast, where they remained in Gettysburg, PA until returning to Hamilton in 2018. John was an active Parishioner at the Assumption of the Virgin Mary Byzantine Catholic Church in Trenton, NJ for over 65 years. John's later years were blessed with spending time with his grandchildren and great children. John was predeceased by his parents, Michael and Anna (Leskin) Lucash, his bride for a lifetime, Marge (Hanuschik) Lucash, his eldest son Michael Lucash and John's only sibling Mary. John is survived by his son Richard and daughter in law Robyn Lucash, his daughter in law Debby Lucash, his grandchildren Michael Jr., Matthew and his wife Jessica, Taylor and her husband Peter, Kaylie and Owen; his great grandchildren Ava, Hank and Hilton Richard and his sister in law Anna Pirrera along with several nieces, nephews, cousins, great nieces and great nephews. Due to the Coronavirus restrictions, Funeral Services will be private. Memorial Contributions in John's memory may be made to Assumption of the Virgin Mary Byzantine Catholic Church, 191 Norman Avenue, Roebling, NJ 08554 Arrangements are under the direction of Knott's Colonial Funeral Home, Hamilton NJ. Condolences to knottscolonialfuneralhome.com