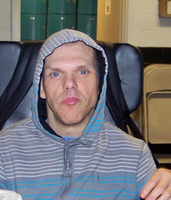 Jay A. Bedell, 58, of Atlantic Highlands passed away on January 9, 2020 at Riverview Medical Center in Red Bank, NJ. Born in Jersey City in 1961 weighing only two pounds Jay spent his life showing people he could do more than one might think. In spite of moving to an institution before age 5, Jay developed an inner resolve that many of us only strive for. Jay moved from Woodbridge Developmental Center in 2008, coming to reside at The Arc of Hunterdon Henderson Group Home and to attend Point Breeze day program; it was clear from his first visit that he had decided this was home. What followed were many firsts – such as his first sports team jacket; he was so proud of it that he decided it went with everything… every outfit, every day, even with pyjamas! It was that enthusiasm that he had for the special things in life, no matter how small, that was contagious. A great meal was always followed by a compliment to the chef of picking up the plate and licking it to show it was that good! Jay found enjoyment in day trips, he took a cruise and danced the night away, he attended recreational activities and went bowling and shopping. He enjoyed the activities, but probably more so enjoyed the people-watching once there and the special time with those who took him. More firsts included going to his day program where he enjoyed the social nature of the program as well as his own radio; and he truly enjoyed the people he met there. When given the opportunity Jay also went out of his way to help others, volunteering as a bell-ringer for Salvation Army one Christmas Season and doing a 'stuff the bus' food drive for the local food pantry. Jay knew many signs but also went out of his way to be kind and communicate with those who didn't know his signs by using gestures instead. He cared deeply about those around him and developed some incredible relationships with people who came to know him over the years. He enjoyed flexing his muscles to show his strength and never could pass up an opportunity for a practical joke or to share a hearty chuckle if someone happened to bump into a wall or trip. He loved hanging out with the guys and blowing kisses to the ladies; his personality was endearing and his tenacity awe-inspiring. And of course he could never pass up the opportunity for a practical joke or a hearty chuckle when someone else happened to bump into a wall or trip. This petite man lived his days with energy that was far larger than his stature, and always turned up the music! As Jay became ill his resilience shown through more than ever. He didn't need to flex his muscles to show his determination; he made it through illnesses that almost no one could and came out with energy and renewed interest in getting back to doing things he enjoyed. He fought through time in hospitals and nursing homes, and through set-backs that many of us would have found insurmountable. Last year he was able to get out of the nursing home and into another group; he moved to an Allies, Inc. Atlantic Highlands group home and began attending their Wall day program. Jay was back to people watching and making new friends. It's hard to believe that after 58 years of courage, of chutzbah, and of tremendous resilience Jay has gone to rest with his mother and many friends who have gone before him. He will be missed deeply. His strength in the face of every single situation coupled with an inner spirit that brought positive energy stands as part of his legacy." Funeral services will be 11:00am Tuesday, January 21, 2020 at Knott's Colonial Funeral Home, 2946 South Broad St. Hamilton. Visitation is 10:00 to 11:00am Tuesday at the funeral home. Burial will follow in Fountain Lawn Cemetery, Eggerts Crossing Rd., Lawrence Twp., NJ.